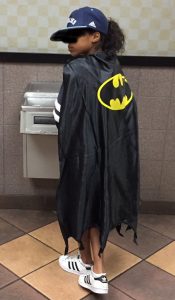 You never know when you’re going to meet a superhero. I certainly didn’t expect to meet one at an interstate rest stop during a recent road trip. Yet there she was, getting a sip of water from the fountain outside the rest rooms.

The cape is what caught my attention but the way the wearer held herself is what kept it. I saw poise and I saw power. She looked to be about 9 or 10. I’m assuming gender based solely on the hair cascading from the back of the adult-sized snap-bill cap. I’ll continue using a female pronoun in this narrative but boy or girl, the outcome of story is the same.

I surreptitiously took a picture while she had her back to me, to preserve her anonymity. But when I looked later I saw that I’d caught her as she turned her head toward me,  as if she knew what I was doing.

I made eye contact and told this young woman I thought her cape was cool. She smiled. Not a shy “oh, no, a grownup noticed me, I’m not worthy” smile but a smile that said she knew she had power and was pleasantly surprised that it had been recognized.

I held out a heart to her. She was reluctant to take it. Frankly, I was reluctant to give it mainly because it meant elevating our exchange from  casually verbal to tangentially physical. I was very aware that a parent might be nearby,  rightfully vigilant about the behavior of other adults toward their young child in a bustling rest area on a major highway. But I addressed her as the equal empowered being that she was.  “Go ahead. That’s for wearing a cool cape.” She took it and smiled that power smile again.

I would have loved to ask her name and talk with her a little bit but as mentioned it wasn’t the time or place. I gave her a parting nod to honor her then found my traveling companion and headed on down the road with him.